Crafting in the south of Glasgow

Some of my classes at the residential homes take a bit more preparation than others, especially if I am trying out a new material.

One of the residents had said in a previous class that she had always wanted to work with clay. Now I’ve done some things with the standard air drying clay but it can be quite messy and I only have an hour session for each class.

I originally thought of Fimo, I have some in my craft stash but hadn’t tried it yet, so I was slightly disappointed when I realised it needed baking in an oven. The staff at the homes are very accommodating to the chaos I bring but I though I’d be pushing it asking them to bake clay creations.

I knew I didn’t want Plasticine, I try to ensure that the residents don’t feel like they are being treated like children. So I hit the internet to see what I could find.

And I found this, it’s an air-drying clay in multiple colours. Non-toxic, not messy and light. It feels like a cross between foam, slime and putty. 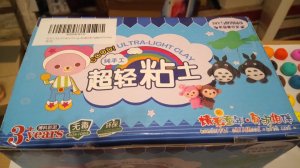 Obviously I won’t be taking the putty in that box. 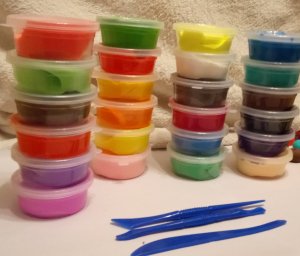 There are 24 colours and 3 modelling tools provided, but it is very easy to mold using your hands and unlike standard air drying clay it doesn’t stick to you.

The next stage is to see how it handles and dries. I started by making a bead from each colour in order to determine if the clay cracks, crackles or if there is any change in colour when they dry.

Also means I can thread them as an example piece. As an aside I think these may work well as bag charms similar to the felted one I made at The Milk Cafe. As a side note, their craft sessions start back next week and it’s making clay animals – how’s that for timing? 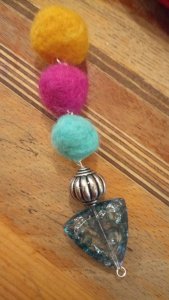 Next up seeing how the different putties could combine. I wanted to see if it’s possible to swirl the colours without them blending. My practice one used brown & yellow to give a contrast. It works but I need more practice to get it exactly how I want it.

Then it’s combining the colours. I chose a red & blue mainly because purple is one of my favourite colours, but also I’d noticed the red putty was slightly softer than the others so I thought it would make the first mixing easier.

I need not have had any concerns, it was very easy to work the two together. Less than a minute.

By this point I had company, my daughter (13) was interested, so I said for her to see what she could do. 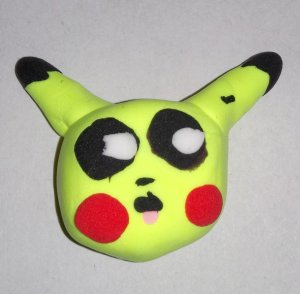 Pikachu looks a bit startled but that’s understandable as she’s made a hole through the back of his head to turn him into a charm.

She’s also made a selection of multi-coloured beads to go with him.

They still feel a little squishy but structurally intact; I would not be able to remould them into another shape and could possible thread them. I’ll leave them overnight before I do that and see if there’s any further change.

I wouldn’t call the end result clay like, still feels a bit like foam.Some of the bead holes had closed up but it was easy to push a needle through to thread them. They would split if you squeezed them but bounce when dropped.

So overall not quite what I was after but a fun product to use. My daughter is definitely a fan, she’s making a cat right now, and it will something different to try at the residential homes.